Merry (belated) Christmas, everybody!  If you celebrate it, I hope it was wonderful.

For my family, Christmas was pretty little.  I got some clothes (two sweaters, a pair of jeans, fuzzy socks, wool socks, knee high bookworm socks, and knee high TARDIS socks, and two Doctor Who shirts), a few books (Nick and Norah's Infinite Playlist and It's Kind of a Funny Story), some white board pens, a few little bag-type things, and River Song's screwdriver.

I'm quite happy with everything I got, though.  We had a crazy four day long stretch of Christmas, starting on the 23rd, where we had "family Christmas", where we all headed to my aunt's house and had Christmas with everyone in our extended family.  Christmas Eve was, as usual, hosted at our house, where we went to 5:00 mass, then headed home and had dinner and chatted, and exchanged a few gifts.

Christmas was, of course, Christmas, and we opened our stockings and gifts, and then had a lazy day, eating left overs for lunch, and playing with our gifts.  It was quite nice, really.  Then, on the 26th, I went over to a friend's house, and we baked cookies and had lots of fun.

All in all, it was a good Christmas.

I can't believe Christmas has come and gone so quickly.  But it was fun, if a bit hectic.

In Which I Am Clumsy 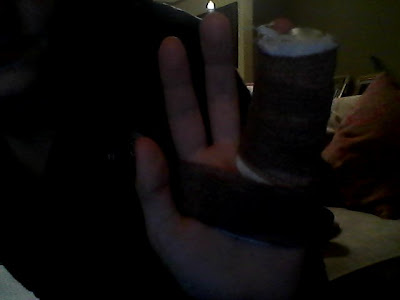 Wondering why I haven't been around recently?

Last Monday, I ran into a wall, and sprained my pinky finger on my left hand.  Luckily, I'm right handed, but I was wearing the above splint up until yesterday, making it rather difficult to type.  Also, it was a kind of crazy two weeks, school-wise.

Now I just have tape on my fingers, but... yeah.  Sorry for not being around recently!  It's easier to type now, but my finger is still sprained, so it's not making it too easy to type.

I really need to stop running into things.  I've broken a toe by running into a door, I once chipped a tooth on a wall, and now I've sprained my finger.  This seems to be an ongoing problem...

But yes, hopefully I'll be back and blogging again soon!

Email ThisBlogThis!Share to TwitterShare to FacebookShare to Pinterest
Labels: Life, Me 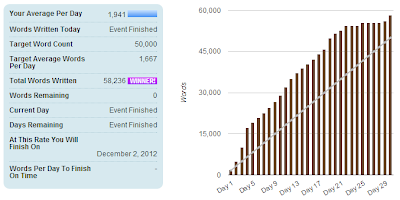 My final word count of November, was 58,236.  I wrote about 2,000 words on Friday, determined to have a last "hurrah" of writing, for the month of November.

As you can see, by looking at my stats, for most of November, I was far ahead of the daily word goal, and going up at a steady pace.

But I'm okay with that.  Sure, if I had written every single day afterword, my novel might have ended up longer than it is now, I might even be finished with it.  But I'm okay with not having written every day.  Sometimes, you need a break from NaNoWriMo... and taking that break after you've won is always considerably more beneficial to your word count, then taking it in the middle of the month.

I'm happy with my word count, and, unlike last year, I don't completely hate my story, either.  In fact, I quite like it.  It's not finished yet, and there is certainly still "tweaking" to be done to everything, but all in all, I like it.  It's not terrible like last year's (which I will not go into detail about, but really, it was terrible,) which makes me happy.

This is the first year that I haven't finished my novel in November.  It's also the year where I wrote the most, beating 2011's NaNo out of the top spot for "The Most I Have Ever Written on Anything.  Ever." list.

So yes.  NaNoWriMo 2012 was a very productive month for me.  It makes me happy that I won so soon, and I love the fact that I was able to push myself to do so.