An Open Letter to Tamora Pierce

Your books mean the world to me. I've read all of The Immortals series more times than I can count. Alanna, Daine, Keladry... they're all some of my role models. I mean, really, those ladies are some of the best literary characters I've ever met.

I was first introduced to your books in the summer between fifth and sixth grade. I went on a two week sailing trip with my family and another family we were friends with, but I was the only kid my age on that trip. My friend who was supposed to come broke both her wrists just three days before we were set to leave. So I read. And I read. And I read. I think I read Wild Magic twice on that trip. If I didn't read it twice, then I certainly spent many hours above deck, watching the water go by and pretending I had animal magic like Daine, and that I could talk to the animals surrounding us.

And then I met Alanna. And Kel. And Beka. And Aly. And I fell in love with them all. Your books were what I turned to when I was sad-- the stories of these five ladies were always able to cheer me up. At this point, I've probably read Wild Magic and In the Hand of the Goddess more times than I can count.

I got the chance to meet you last year, on your Mastiff tour. We only got the chance to talk for a minute or two, but you remarked on my old, beat up Random House Fantasy trade paperback copies-- copies of the books you hadn't seen in a long time, you said. You were afraid you were going to break them. You wished me luck on my second NaNoWriMo adventure, which I was starting in just a few days. I was over the moon about that. Hearing that from one of my favorite authors, one of the people who had written some of my favorite heroines was amazing.

So I just wanted to say thank you. I'm sure I said it on the tour, where we stood in the bookshop I'd been going to since I was just a little kid, and the owner said, "We've known her since she was little. She's a writer too!", and where I awkwardly handed you my dogeared read-a-thousand-times copies of your books. But I wanted to say it again. I'll always be grateful to you, and to your books. They truly helped shape my childhood, and I can't imagine my life without them. Alanna, Daine, Keladry, Aly, and Beka will always be some of my best friends, and I'm always happy to revisit their stories, stories that I've read a hundred times already. 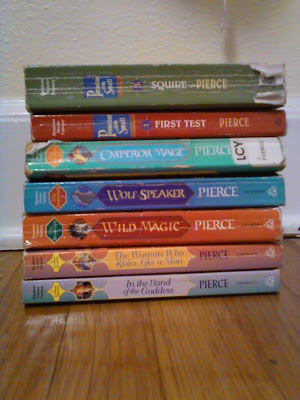