I'm a city girl.  The America that I know is tall buildings, neighborhoods tightly packed with houses, the constant rumble of cars, nature experience only when you walk to the park, or climb the tree on the parking strip.

Road trips give me a small glimpse into the rest of the world, the America that exists outside of my city-bubble.  Because really, that's what cities are.  They're little bubbles or pockets of people, people everywhere.

Rolling hills of grass, yellowed by the August sun, not getting enough water.  Green trees contrasting the grass.  Old houses, old cars, big billboards advertising things that people probably rarely use or buy or go to.  Big green highway signs, produce stands nestled just off the road, cherries for 5$, 'We have avocados!', u-pick blueberries.  Towns glimpsed from the highway, signs saying wrong way, do not pass, exit next left, dirt roads, green street signs perched atop stop signs.  Hot sun streaming into the backseat, fluffy white clouds ringing the circle of sky I can see from the ground  To one side, mostly flat land, to the other, oxymoronic (?) tiny mountains, perhaps classified as big hills.  Exit 20 M.P.H., tiny lakes, barns, identical houses all in a row.  White siding, gray roof, brown fence.  Power lines edging the road, a roadside Dairy Queen, a motor home parked in the parking lot. A rusty car, a beat up truck, a cool orchard of fruit trees, all in a row.

And then we're in the city again, but not my city.  And it's full of tall buildings and people everywhere, and stores, and pay-to-park signs, and trees on parking strips.  And people dancing in the park that used to be a parking lot, and pizza places that make their own fruit soda, and hipster colleges and famous bookstores.  And an old man yelling about the end of the world while his dog looks resigned, and people clamoring about petitions, and frozen yogurt, and the farmers market and a street filled with food trucks.

And then we're off again, and we cross the border back to my state, and it's rush hour and familiar trees and yellowed grass.  And then it's wondering about license plates and finishing books, and pink turtle window stickers, and bumper stickers loudly stating opinions, and no-parking-tow-away-zone signs.

And then it's home again, back to a familiar city, with familiar buildings.  Familiar trees and road construction and businesses and cars and jokes.  Home again, home again after a brief adventure in another state.
Posted by The Dandy Lioness at 8:27 PM 3 comments:

The Summer During Which I am a Lazy Blogger

It's true.  There's no getting around it.

This has been the summer during which I am a very lazy blogger.

I mean, you can't get around that fact.  I had planned to have multiple posts a week, filled with photos and interesting things I'd done, and all sorts of fun stuff.

I've gone to two camps, a writing camp, and an Irish dance camp.  Other than that, however, I have been home.  All summer.  I start school back up the Wednesday after Labor Day, and if anyone asks what I did all summer, I'll probably be at a loss.

To be honest, my summer has mostly been spent lazing around the house, eating otter pops, reading books, going on Tumblr, meaning-to-but-never-really-getting-around-to editing my NaNoWriMo 2010, wondering where all of the summer went, browsing blogs, wishing I was being more productive, and watching all sorts of new TV shows.  Also knitting.  There has been a lot of knitting.  At least in the past three weeks.

I'm going on a short vacation on Sunday through Wednesday, so at least I can say I did something.  I also went to the ocean at the beginning of the summer, which you may remember me posting about.  But... ah... yeah.  Most of my summer has been at home.  Which is lovely, it really is, but I do have to wonder where it all went.  It seemed like I had so much time, but now it appears that I have very little left at all.

I start high school this year, which is weird.  Weird as this sounds, I don't really have any particular emotion toward starting high school.  I'm not excited, nor am I terrified.  I just kind of figure it's coming up, and there's nothing I can do about it.  I'm not particularly excited to go back to school in general, though it will mean that I get to see my friends more.  (During the summer I am notorious among my friends for uh... not actually seeing anyone.  In fact, I think during the entire summer, I've actively gone to seek a friend out maybe... fifteen?  twenty times? if that.  Probably more like ten.

I know, I know.  It's the summer, I should be hanging out with my friends!

But I'm a rather solitary creature, generally, and it often won't occur to me to seek out a friend.  I'm happy being by myself, just kind of floating around the house.  I don't really need others around to entertain myself. Not to say that I don't enjoy seeing my friends, which I do.  I'm just probably not the most reliable when it comes to making plans, returning phone calls, going places...

Somehow, I'm a rather solitary person who has lots of friends.  I have to say, I'm not quite sure how that happened.  But I like it.  I like having friends, and spending time with them.  I like flopping on bedroom floors, reading dumb magazines, or chatting about books, or having impromptu photo shoots with the dress-up box.  I like walking to the store and getting candy and a soda, or jumping up and down because of a TV show we both like, or a book, or a movie.  I'm just not the best at getting around to seeing people, when left to my own devices.  Really, if you're friends with me, it's likely you'll have to invite me to do something, or I'll never leave the house, unless my mother makes me.  I can spend days at home, by myself, entertaining myself.  Eventually, I'll call up a friend, but it can take up to four days before it occurs to me.  I'm weird that way. 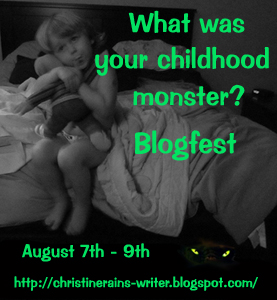 
Christine Rains is celebrating the release of her new book Fearless with a blog fest!  I thought I’d join in, since a) I haven’t posted in a while, and b) the topic sounded like fun!

I'll be hosting a blogfest that will go from August 7th to the 9th. You can post on any one of those three days. (I like it when blogfests give you an option of which day to post on!) For this blogfest, all you need to do is write about your childhood monster. Did you have a beast living under your bed? Or was the scary clown in your closet?

My first instinct is to say witches—when I was really young, I thought that witches lived under my bed and in my closet, and I could see their shadows creeping up on me.  But that pretty soon switched to the Basilisk, in Harry Potter.

That thing terrified me.

It probably had something to do with the fact that I would listen to Harry Potter with my sister, as we were going to sleep.  We would put in the tape (we have all the books on cassette tape, except for Deathly Hallows, and I still listen to most of them on tape), and go to sleep as it was playing.

The thing about Chamber of Secrets, is when you read the book itself, it’s not actually all that scary.  At least, it wasn’t to me.  But when you listen to it, especially as you’re going to sleep, you can just imagine the basilisk coming to find you and paralyze you.  And in the tapes, past tape two or three, I’m not actually able to listen to them anymore.  Because once Harry starts hearing “Deaaath, deaaath!” being hissed from the walls, I start to get thoroughly creeped out, and stop listening.

I was also afraid of graveyards, and zombies/ghosts, until I was about seven, when I voiced this fear to my dad.  He then took me into a graveyard near my house one evening, and showed me that there was nothing to be scared of.  I was terrified and almost in tears, but once we were inside the graveyard, I realized there was nothing scary about it.  Just sad, really. 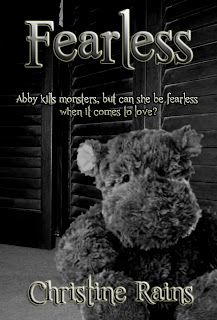 Abby White was seven years old when she killed the monster under her bed. Now she slays creatures spawned by the fertile imaginations of children, and the number of these nightmares are on the rise. Neither she nor her guide - a stuffed hippo named Tawa - know why.
When she rescues Demetrius from an iron prison, he pledges his life to protect hers until he can return the favor. She doesn't want the help. And how can she concentrate on her job when the gorgeous wild fae throws himself in front of her during every fight? No matter how tempting, she can't take the time to lose herself to him.To save the children and all she loves, Abby must be truly Fearless.